During the past weeks I’ve read a lot about the new Tesla pickup Cybertruck and I’m not referring to data sheets or articles in magazines, I’m talking about people’s comments on social media. What I found is that we have a peculiar idea of what’s elegant and what’s not, our concept of beauty is twisted to say the least and has different standards to different categories of product. A fair share of gearheads made fun of the poor thing labelling it as childish, arguing that it’s too simplified to resemble a proper vehicle but who said that mainstream car design is the best achievable? Commercially speaking it could be, academically speaking there’s room for improvement.

We got used to certain common aesthetic features in cars, they kept evolving for over a century in a smooth way (with some disruptive exceptions) trying not to shock buyers -cause in the end it’s all about sales- but this doesn’t mean that the ultimate product of this metamorphosis from model T to nowadays SUVs and trucks is the best compromise between style, cost and practicality.

We are accustomed to organic shapes and that’s why we throw anatomy terms into car design, words like shoulders, tail, dog-leg and musclecar itself of course can be heard at a briefing with designers. Vehicles are 21st century armors, we identify as our car while driving it and movies played a big role in giving automobiles human connotations, just think about Herbie and Cars. Think about it: On the road we prefer to be a Jaguar rather than being a Pinto, right? It’s in our nature. The truth is that only few can afford outstanding performance, the rest just make do sitting in over decorated vehicles padded with superfluous air intakes, useless grilles, chrome trims, even fake plastic exhaust pipes (oh God, these are the worst). Now it’s funny how the same standard doesn’t apply to home interior design, quite the opposite indeed: a high percentage of people consider minimalism in furniture a sign of elegance while, for instance, the replica of a baroque cabinet with fake gold details is definitely ‘ew’ (more like Eeew!). Now, the first question is: Why do most people think minimalism is a plus in architecture and not in car design? Furthermore: Is the future of car design doomed with the addition of useless features to give more charisma to products? Of course nobody is forced to like Elon Musk’s latest sharp creation (or the rounded VW New Beetle for that matter) but it is fair to say that the Cybertruck is unattractive as much as other competitors are tacky. Yes, we all want to drive something that makes us accepted by peers without looking like out of place, after all understatement is still a value, but embracing passively the standard of the majority has never been a good sign in society. Like it or not, the Cybertruck brings fresh air to the establishment, hence, the topic of this discussion is not whether I love it or hate it but it’s about recognizing Musk’s effort to make a bald statement sharing with all of us his crazy (but intelligent) dream and I personally thank him for this.

I was an industrial design student in the late nineties and one of the most popular word among insiders was ‘multipurpose’. We discussed a lot about our projects and the lowest common denominator was that infamous word, multipurpose. It didn’t matter what the discipline was: furniture, car design, product design, multifunctionality was the aspiring designer’s holy grail. It was like if we wouldn’t be able to put together several different features in a single object we were going to be just half of a graduate, wannabe designers with the original sin: the sin of not inventing something new and complex. Creating a fork that was just a fork would have been regarded as a failure in the attempt of making complicated an otherwise simple object. Let’s make a distinction first, I’m not talking about complexity in style or shape, not at all, minimalism was a well accepted diktat. Things should have been designed showing outer elegant simplicity and hidden brainy complexity, in other words we had to prove that we were able to give an added value or extra purpose to simple goods. We were not stylists (in its academic acception) but designers thus we had to go beyond caducous mere beauty. Easy to be said not to be done because most of the times we -students- were delivering answers to unasked questions, for us things had to be extremely modular and preferably detachable, we wanted to extend the sectional idea to any inanimate thing. It was a functional binge, a multitasking galore. As you know, my beloved reader, school is one thing, you just have to please (cerebrally, not physically) the professor, market is something different. Companies need money to survive and don’t make a big thing of ‘how intelligent a product is’ as long as it floods them with pecunia. Staying alive in the market is more of a cash flow competition rather than an intelligence contest, of course intelligence is required to thrive in business but products don’t necessarily have to be Einstein approved to sell. Just think about the visceral passion kids have for slime: it’s simple, no shape, apparently silly, doesn’t develop the brain for what I know, but it’s anti-stress and in a society where kids are over-scheduled they could really use some slimetime. All this unbearably boring preface doesn’t mean that quickly and badly designed stuff is OK, not at all, just don’t overthink, don’t overdo because afraid it’s never enough, don’t make your wife a greenhouse when all she wants is a rose, that’s the point. Always remember that one clear sentence is stronger than a long confused paragraph. If we look around there’s plenty of examples pointing that out, now let’s indulge in this dull and drowsy matter by listing some of them so the reader will finally fall asleep.

1. ARCHITECTURE
I’ve read many times about architects conceiving shared spaces that can be used as offices during the day and sort of clubs in the afternight. Open spaces constantly switching from work to leisure time, from internet entrepreneurs to clubbers. Correct me if I’m wrong but so far I didn’t see many people excited about it. True, startups were born at Starbucks’ tables and true, many do online business from there but they just sit at a table for some time, they don’t rent a place where the night before hordes of beery barbarians committed themselves to make the whole building sticky and dirt.

2. AUTOMOTIVE
In 2003 Chevy introduced the SSR, an all-in-one vehicle putting together a convertible, a pick up truck, and a retro styled muscle car. Its design was eye catching (I mean it, really), the trunk was the sum of a Z3’s a Porsche’s and a Vette’s, last but not least it diligently delivered up to 390hp, not bad for the average ride experience on the coast. The point was that German sports cars buyers didn’t even look at it, truck lovers kept putting practical aspects first and pony cars junkies.. well, you know them. I personally liked the SSR but I also know car guys: they’re fundamentalists on four wheels with their own strict beliefs and opposite doctrines can’t coexist on a single chassis. It didn’t work.

3. FASHION
“I want to buy a bag good for any occasion” no woman ever said.
I’ve seen several bag design contests where young designers showed their talent creating rather peculiar ‘transformers bags’.
WARNING: GRAPHIC CONTENT
I’m talking about weird stuff my friends, bags that can be opened as umbrellas in case of rain or unfolded on the ground as mats. Large tote bags imploding like popples to become purses and the freak show goes on. You know something? Bags are like drinks: every moment of the day requires a specific one, don’t you dare mixing chocomilk, Chianti and Jack Daniel’s in one glass assuming to swallow this unfortunate concoction throughout the day.
The rules we need to follow -as designers carrying out our dirty job- are:
A. Keep in mind practical aspects because only pure art should be useless.
B. Add just the features that customers really ask for.
C. Pack the whole thing with the proper style depending on the target customer not only your personal taste.

I developed the early stage of this crocodile handbag (pencil sketches) for a client based in LA leaving the engineering phase to its supplier. Here can be seen how close the final result is to the original idea. They did an amazing job, didn’t they?

A cylinder bag designed to be used as a cross body bag, a handbag or a backpack. Its classic and simple style is revved up by a 2 inch zipper which actually was hard to find, it took weeks to get in contact with a producer of such thing and get it shipped from far east. There is no need to add more accents since its presence is enough to make the difference: one strong sign makes the bag’s design immediately recognizable, adding more stuff would make it overcrowded of details.

100% cotton multipocket backpack specifically sized to be a carry-on baggage. There are as much pockets as needed during a trip the way items and papers (boarding pass, passport, cell phone, metro card/airtrain, custom declaration form) are handy. Its deliberately rough look underscores the main qualities: strength and durability but with an eye on streetwear style.

One pocket per every item 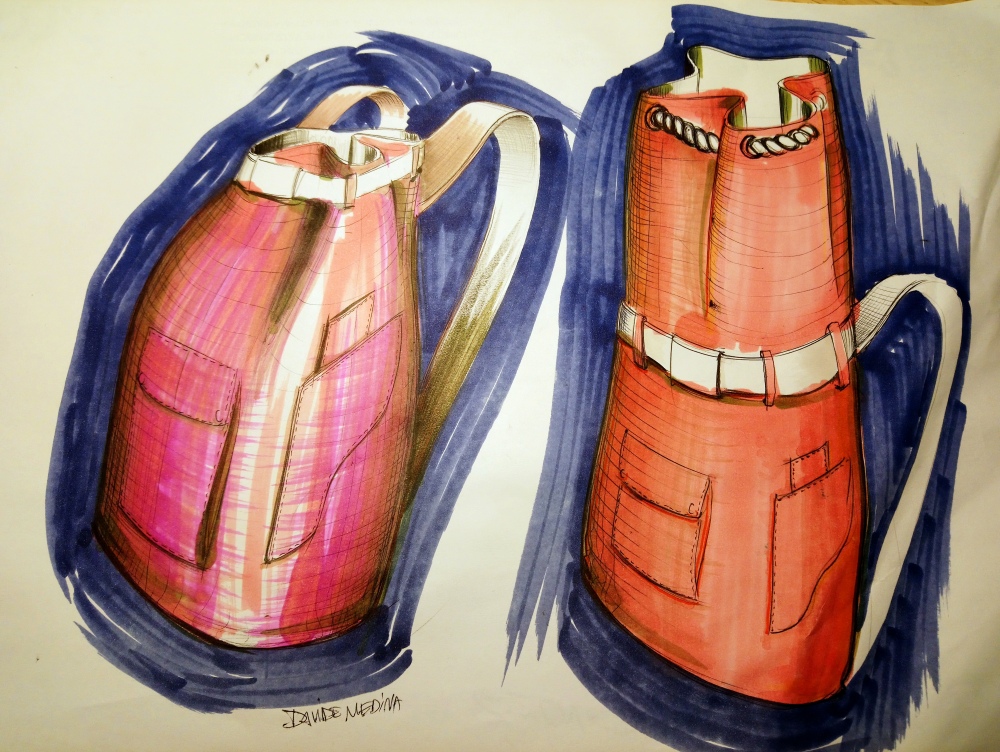 Why do backpacks have one side to be shown and one to be covered by our backs? What if we make a double-face backpack with the 2 sides in different styles and colors? That’s the idea behind X: a black serious face matching business attire during weekdays and a red edgy one on the flip side.

Practical aspects are obviously taken into account, this means both sides are provided with tablet size pockets and the backpack itself is extensible with a zipper. 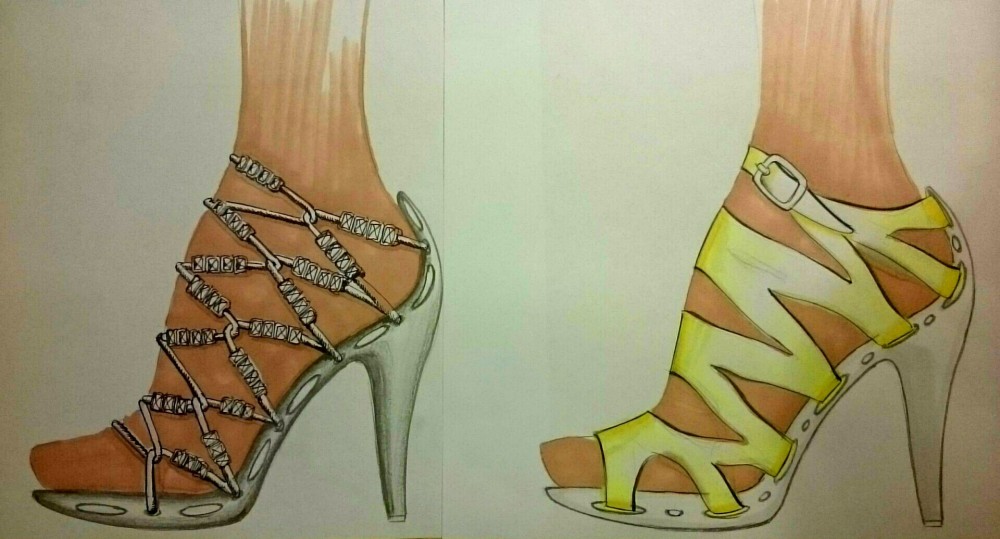